While Drug Enforcement Administration agents in California are cracking down on the popular new drug known as “wax,” people in Colorado are rushing to embrace it.

Wax, the ultimate distillation of marijuana, is so potent that it is said a single hit will keep a person high for more than a day.

“There is no weed out there that possesses the punching power that the wax does,” an undercover DEA informant who asked to remain anonymous told ABC News’ “Nightline.” “And it’s like smoking 20 joints of the best grade of weed that you have into one hit of the wax.”

Making the drug is risky. Butane, a substance so flammable that any spark can set off an explosion, is used to strip out the THC, the chemical in marijuana that gets a person high. But law enforcement says the process of making wax is not the only thing dangerous about it.

“We have seen people have an onset of psychosis and even brain damage from that exposure to that high concentration of THC,” said Gary Hill, assistant special agent in charge at the DEA’s San Diego office. “Our concern is that this is going to spread before we get it under control.”

But a thousand miles away, in Colorado, wax is legal. Anyone over 21 can walk into a recreational marijuana dispensary and buy it right off the shelf. There’s even a three-day contest, named the X-Cup, held in broad daylight in Denver, to see who can make the most potent batch of the same drug upon which DEA agents are cracking down in California.

The contest also serves as a new kind of trade show for budding entrepreneurs trying to position themselves in the new legal wax marketplace, and they come from all walks of life. “Nightline” met some of the contestants in November at the first annual X-Cup hosted by Thurlow Weed. 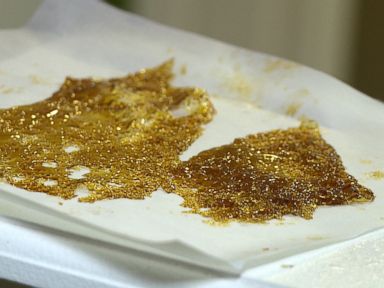 ABC News
Wax, the ultimate distillation of marijuana, is so potent that it is said a single hit will keep a person high for more than a day.

“I don’t smoke like those guys in there either, to be honest with you,” Brodie Hill told “Nightline.”

Hill moved his whole family from Texas to Colorado to try to get into the wax business. His wife, Melissa Sled, uses the products her husband makes.

Emily Rodriguez and Selena Salazar were the only two women to enter the X-Cup. The two hoped to make their mark on the wax industry by winning the competition.

“We do this outside because we don’t want it to explode,” Emily Rodriguez told “Nightline” while making a batch. “We don’t want to blow ourselves up.”

Jay Hood, who was the winner of best THC in the contest, recognized that wax can be dangerous.

But, he added, “The American dream is definitely getting closer and closer. It’s the new gold rush.”

For now, in Colorado, the DEA has decided to allow state-regulated marijuana businesses to operate despite federal law, creating what is sure to be a huge tax windfall for the state.

“We catch ourselves in a rock and a hard place,” Gary Hill, the DEA agent, told “Nightline.” “We want to enforce federal laws, but we have times when state laws make it difficult for us to be able to enforce the federal laws, as well.”

The most dangerous place in America